How safe is vitamin D?

“All things are toxic, and nothing is without toxicity; the dose alone determines if something is toxic.”
Paracelsus

I am often asked, “How safe is vitamin D? If my toddler gets into my vitamin D, will it hurt him?”

Generally, no. The exception may be a bottle of 50,000 IU capsules of D3. If your toddler ingests 20 capsules before you find him, he will probably develop hypercalcemia and may die.

Of course, there are risks with a child getting into anything they are not supposed to. Ingesting 20 capsules from a bottle of 50,000 IU D3 will likely result in an emergency situation of hypercalcemia, in which it is important to get medical attention as soon as possible.

When occasions as tragic as this occur, vitamin D opponents (and there are opponents) will pounce, “I told you, it’s a dangerous drug.” However, many often ignore the potential dangers of Tylenol, which is marketed in a bright red and yellow bottle, easily mistaken as a harmless candy by young toddlers.

Of course, should any child die from an accidental overdose of prescription or over the counter drugs, the situation is tragic and precautionary measures should be taken to prevent further injury or death. However, when situations such as these occur, lawsuits occur and many ignore the fact that these products have been on the market for decades without any problems. The issue does not lie with the product, but with the dose, as my friend Paracelsus might agree.

Another common question I have received over the years is, “If I mistakenly take two capsules instead of one, will it hurt me?” Theoretically, if you took two of the 50,000 IU capsules per day for at least two months, you may reach toxicity. It all depends on your genetics and your weight.

Will it hurt to take 50,000 IU/day for several weeks? As I have written, in all ways that can be assessed, vitamin D is safe. For example, let’s compare vitamin D to water. Assume you need eight glasses of water/day for good health. Ten times that amount will rapidly kill you via fluid intoxication. Now, let’s assume adults need 10,000 IU/day. Ten times that amount (100,000 IU/day) may also be fatal. However, both are essential for life, and both can be detrimental if taken in excess.

How many people die every year from vitamin D overdose?

As I wrote, of the 15,000 Americans who overdosed on vitamin D from 2001 to 2014, none died. Only five of the 15,000 developed signs or symptoms of toxicity, and 2 were infants who had D drops put into their nose instead of their mouth. During that same 14 years, more than two-thousand people died from Tylenol overdose, including a number of toddlers.

Tylenol (in its bright red and yellow package) overdose is actually the leading cause for calls to Poison Control Centers across the US, about 100,000 instances per year, and is responsible for 56,000 yearly emergency room visits, 2,600 yearly hospitalizations and a staggering 458 deaths/year due to acute liver failure, many of them toddlers. That’s more than 5,000 Tylenol deaths over the same 14 years that vitamin D caused 0 deaths.

By any measurement vitamin D, in physiological doses, is safe. But, that depends on dose. Don’t just say, “I’m on vitamin D.” Instead, tell people how much you are taking. Remember, the dose makes the medicine. 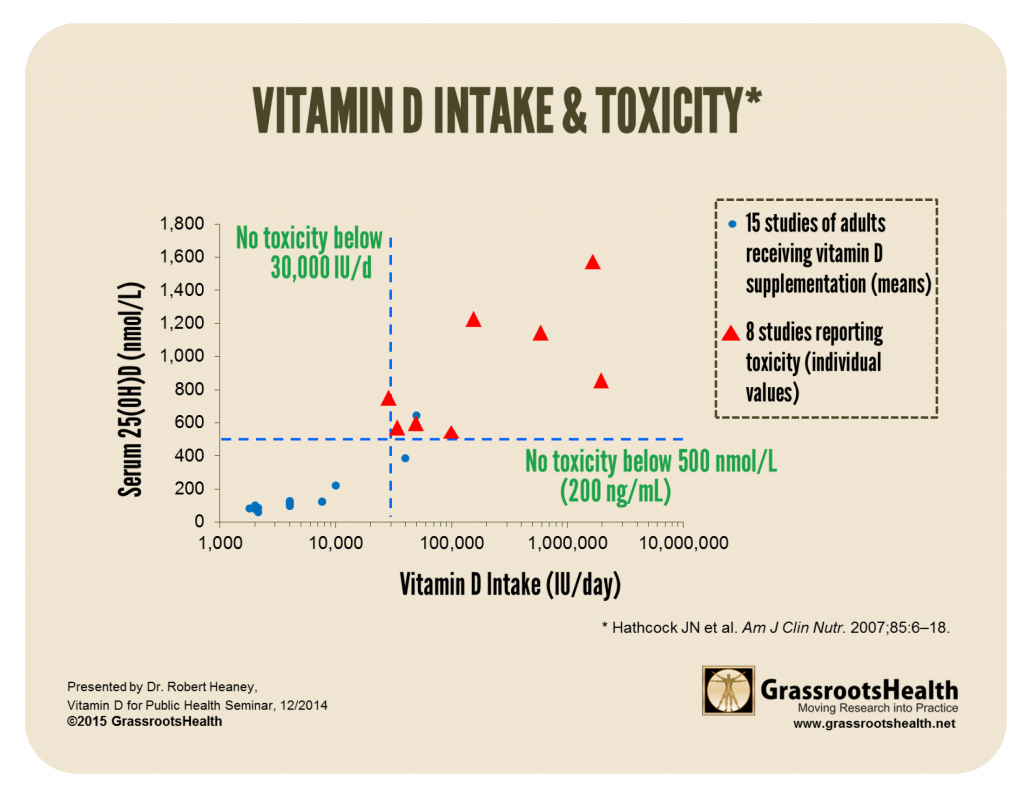 Read also about how to heal your Vitamin D deficiency here

To learn more about Vitamin D, visit the website here